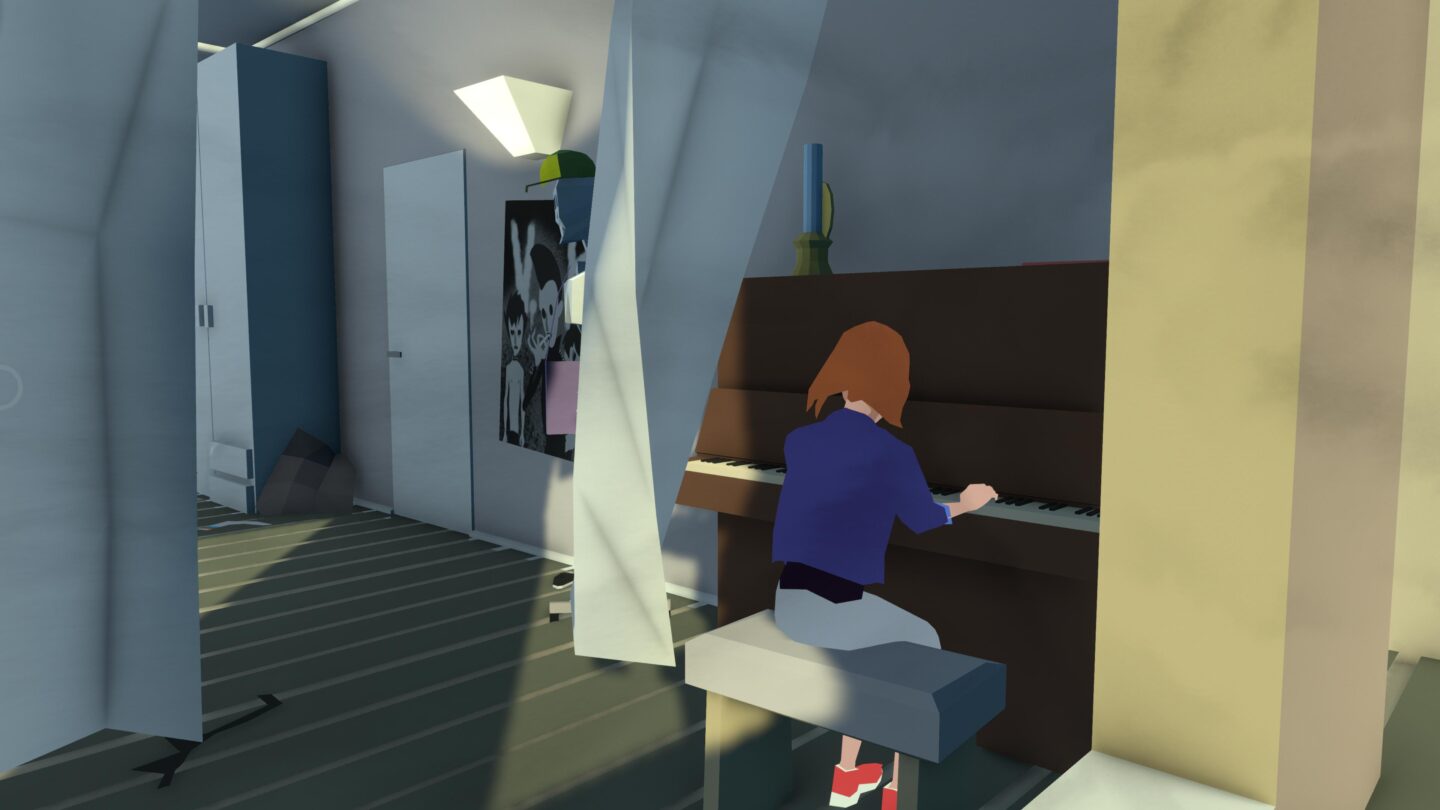 The music of Embracelet

The idea of Embracelet started on a piano. Apart from plunking down some notes on synthesizers, i hadn’t really played the piano since I was a teenager. I’ve always liked the sound of a piano and the weight of the keys, so after Milkmaid of the Milky Way was released I bought a second-hand digital piano. When farting around on the keys, I struck a chord that – pretentious as it might sound – really resonated with me.

Now I don’t read notes and I barely know what the keys are called, but that has never stopped me from making music. This particular chord (F-C-F-G-G#-D# or something?) made me think about blue skies, windy grass and fresh air. It felt both sad and optimistic. Uplifting melancholy, perhaps.

Based on this starting chord, I made a short melody that ended up becoming the main theme of Embracelet. Most of the soundtracks in the game are based on piano chords and melody lines, but I’ve always wanted to create something orchestral. Strings, horns, bazookas or what they’re called!

Back in the 90’s when I switched from making music on a 4 track recorder to recording on a PC, I remember trying to make music with tinny General Midi soundfonts that sounded horrible. These days, having a complete orchestra with great sound quality is not a novelty anymore.

I never studied music, and any professional composer would probably throw up in their mouth a little when they see and hear how I work. My way of working is establishing a base with chords and rythms and trying to add a strong sense of melody to my compositions. I play by ear, add and remove sections until it sounds right.

For Embracelet, I used a mix of Garritan Personal Orchestra, Sonuscore The Orchestra and Spitfire Originals Epic Strings for the orchestral instruments. Here is one of the orchestral tracks, “The Passage“.

The piano sounds of Embracelet comes from The Gentleman and PianoTeq. I used a lot of woodwinds on these tracks, and found that the old Garritan VST had a some solo instruments that sounded great (to me).

I’ve used a Mac for making music for the past 12 years, but since Embracelet is developed on a PC I wanted to move my workflow over to Windows. My Mac was getting old, and to keep costs down I wanted to do everything on one machine. Losing Logic Pro as my sequencer was a pain, but I found a workable and affordable alternative.

Reaper has long been a cheap and stable performer in the PC audio landscape, and despite it – let’s be honest – horrible looks it’s actually a really good DAW. I spent a month dipping my toes in, trying to learn it and customize it to look and perform less… eccentrically. Hidden behind it’s spartan and Windows 95-like look lies a very customizable and powerful audio and midi platform. I had to learn how to set up Actions to make it behave the way I wanted, and after a month of pain I got used to the new workflow and felt I could work pretty fast. Also, the personal and small business license is only $60, which is very reasonable. It didn’t come with many sounds or plugins though, so I had to reinstall all the old stuff that I still had licenses for. If I had a new Mac and was starting out, I still think Logic Pro is a better deal – but for PC composers Reaper is a great choice.

Embracelet started off as music, and at the end of production there was a huge dump truck of music to write. Making a cinematic game with a lot of cutscenes and different settings called for a lot of music. Both short cues and longer background soundtracks when running around exploring.

All in all, there are around 60 music tracks inside the game, and the official soundtrack (that you can get here) has 31 tracks. I’m pretty happy with most of the music and I think it has a coherent, laidback feel that suits the game well. But I look forward to returning to the world of synth sounds and soundscapes again – especially combined with a catchy little melody!

Embracelet is set to release on Steam and Nintendo Switch on September 24, 2020.

If you’re a composer on a budget, I recommend these free plugins. I used these on the Embracelet soundtracks.